Members of RemoteDX Inc that the Annual General Meeting will be held on 19th April 2022 from 1pm at the Collective Hub, Broderick Road, Johnsonville.

The AGM Agenda, annual reports, annual accounts for the year ending 31 March 2022 plus the previous AGM minutes are available on this website below.

ALL WELCOME. IF YOU ARE NOT YET A MEMBER YOU ARE STILL WELCOME

Members of RemoteDX Inc that the Annual General Meeting will be held on 30th May 2021 from 2pm at the Waitohi Hive Makerspace Meeting Room (Ground floor, Johnsonville Library), 34 Moorefield Road, Johnsonville, Wellington 6037.

Afternoon tea will be available from 3.00pm upstairs at the Common Ground Waitohi Cafe.

The previous AGM minutes and the AGM Agenda, annual reports, and annual accounts for the year ending 31 March 2021 will be available on this website shortly.

ALL WELCOME. IF YOU ARE NOT YET A MEMBER YOU ARE STILL WELCOME

Afternoon tea was available from 3.00pm. A special cake commemorated the establishment of Branch 74, fifty years ago.

The Minutes from the 2020 AGM are included below. A summary of proceedings follows

The RemoteDX Inc Annual General Meeting was held on 26 May 2019 at 3pm at Bernard ZL2BD’s QTH at 1 Winsley Tce, Churton Park, Wellington.

Afternoon tea was available from 2.30pm and most attendees were present at the Branch 50 Shed Workshop that started at 1pm.

The AGM agenda, draft minutes of the 2018 AGM, annual reports for 2018/19 and annual accounts for the year ending 31 March 2019 were made available on this website prior to the meeting.

The Committee gave an update of mesh activity and remote site progress (or lack thereof!) at the meeting, and members were able to inspect the remote site “fridge” with all the gear in it immediately following the formal meeting.

Minutes of the meeting will be available shortly.

Report from ZL2ARN on mesh research and developments

At the AGM on 3 May 2018, Mike ZL1AXG outlined the work programme ahead for RemoteDX Inc:

Equipment is now complete in the “fridge” (remote enclosure).  Finalisation of the software testing for SCADA control will continue over winter for a spring installation of the Remote site.

Negotiation of a site agreement and installation of antennas and the enclosure will be a spring activity (dependent on the Mt Climie upgrade).

The RemoteDX Inc inaugural Annual General Meeting was held on Thursday 3 May 2018 from 7.30pm at the Tawa Community Hall.

Reports were received and accepted along with the annual accounts.  A new committee was appointed comprising:

Following the AGM, Mike ZL1AXG and Bernard ZL2BD gave a presentation on progress over the past 16 months and a demonstration of the remote transceiver operation over mesh nodes.  Supper was also served.

The agenda, reports, and financial reports can be found here:

The mesh network is in the process of being upgraded in two ways:

Mesh users around Wellington have been asked to provide access to nodes to allow the upgrading to take place.  Most nodes are now operating on the latest AREDN release.

We have found that over the air upgrades are not always reliable, so it is best to do these in situ.  Note that if you wish to purchase a Ubiquiti node, most are no longer compatible with AREDN or BBHN (no longer under development).   The AREDN team will release a new version of the software in the new year that should be compatible with the newer Ubiquiti products. 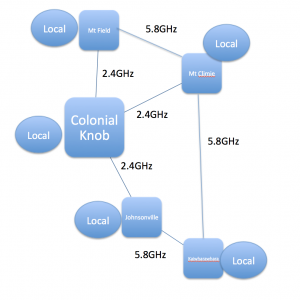 The backbone links between Mt Field and Mt Climie, Mt Climie and Kaiwharawhara Hill (Ngaio), and Kaiwharawhara and Johnsonville (ZL2TBU) will be moved to 5.8GHz off-mesh links over the summer.  Colonial Knob backbone connections to Mt Climie, Mt Field and Johnsonville (ZL2TBU) will remain on 2.4Ghz due to restrictions on use of 5.8GHz at Colonial Knob.  However, it is planned to move these off mesh to reduce traffic loadings and improve throughput.

The committee had a working bee on Saturday 30 September and can now report that the temperature control system is complete (just the cowlings need to be painted and mounted and the filtration system installed).  In addition, the station is running off batteries with the solar charging system under test.

We spent most of the time upgrading Ubiquiti nodes to AREDN v3.16.1.  Further work to recover dead mesh nodes and to run out software upgrades on the Wellington mesh network is planned over the next fortnight.  There will be a further working bee over Labour Weekend to upgrade the network and begin to install a backbone (non-mesh) between significant nodes, so as to partition the network and reduce unnecessary hops. 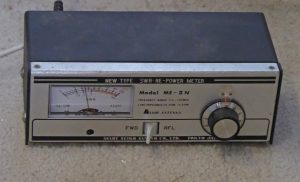 Doug ZL2AOV and Bernard ZL2BD posing in front of the Remote Station enclosure with the metalwork for the environment control mounts in hand.

These will be mounted on the door.  Flaps will open using servo motors for the air intake filter and outlet fans.

It was a couple of days work to make these!   Further work is proceeding on the thermostat control and servo system.